Skip to Main Content
Ten years ago this April I took these photo as the last of the Robert Taylor/Stateway Garden housing complexes were taken down at about 38th & State St. If you look closely you can see Comiskey Park in the background of some of them with its lights on. 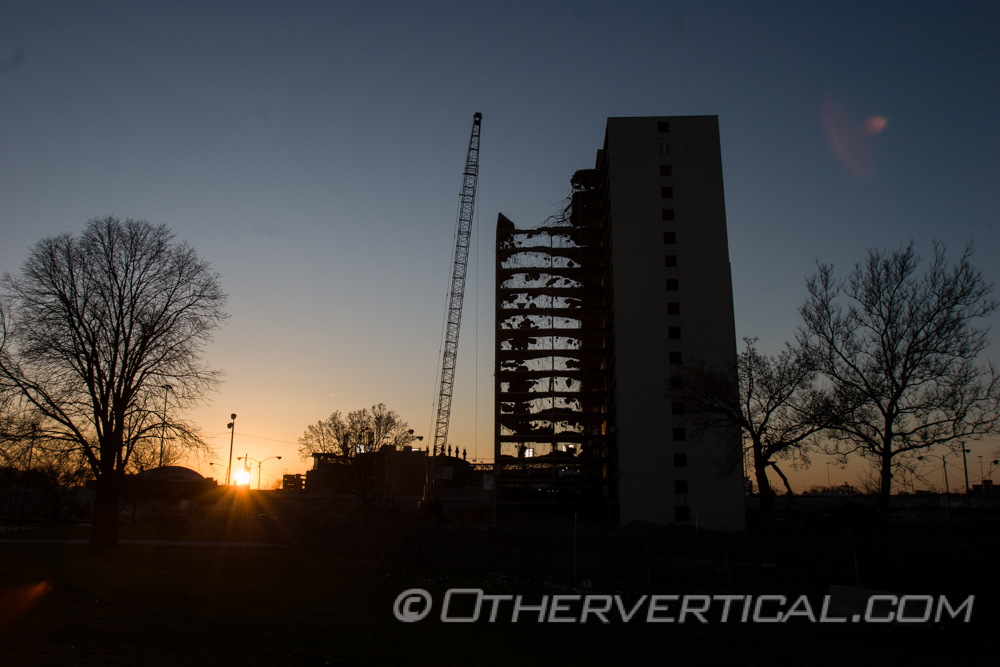 This February will be 11 years since I moved into the Bronzeville neighborhood and I have seen a lot of changes since then. While many plans stalled during the housing bust of 2008, the amount of housing development going on right now is kind of crazy. The area between the South Loop & Hyde Park is being revitalized and it’s nice to see friends who would have never thought about moving south of Roosevelt all of a sudden discovering how much home they can buy or rent, how affordable it is and how accessible the city is via the L and Lake Shore Drive from here. The area is roughly as far south as Lincoln Park is north, but a very wide open, no stop light stretch of Lake Shore Drive makes it feel much closer.

While there are still many complaints about the relocating of the complexes’ residents, very few will argue that the idea of housing thousands of impoverished people in what was essentially warehouses to keep the poor separated from the rest of the city was a good idea.

In an ironic, almost slap in the face turn of events, the first housing complex in the CHA State Street 4 mile stretch from 26th to 51st street was the Harold L. Ickes Homes, built in 1953. It was named after Chicago’s NAACP president & former U.S. Secretary of Interior Harold L Ickes one year after his death in 1952. Ickes who fought for African-American civil rights, and opposed the idea of warehousing the poor in such buildings would end up having his name on one of the more notorious projects in Chicago behind Robert Taylor & Cabrini Greens.

Even though I lived just across the highway in Bridgeport before 2007, I will say I spent very little if any time in the area when the buildings were still active. As an example, while I live on the Northside in the mid-1990s I would often drive, with very little fear, down Division Street through Cabrini Green, which often was the go to reference for bad areas of the city. The Robert Taylor and Stateway on the other hand were downright terrifying to me. It was a 2 mile stretch of pure bleakness, where colors consisted of black and varying forms of gray and stories of success had a better chance of escaping from a blackhole than there.